Grain and wool were the principal commodities that elevated Ghent from a barren marshland to a wealthy trade center during the Middle Ages, and the grandiose gabled, scrolled and chiseled architectural results are still on display when you take a tour with De Bootjes Van Gent. Threading through rivers and canals in a long, slim, open-air boat, you’ll have front-row seats for a historical survey of the city, from the crenelated battlements of the medieval Gravensteen Castle to the Baroque-era fish market to 19th-century textile factories and socialist headquarters. Adults 7.50 euros, or about $8.50.

The city’s motto — “Nie Pleuje!”(translation: “Don’t give up!”) — is a useful mantra as you stagger through the late rounds of the multicourse tasting menu at Oak, a minimalist, white, villa-like restaurant with wood plank floors, autumnal tones and candlelight. A recent meal started with five amuse-bouches (including a supersoft, bite-size blood sausage taco), before moving on to tangy, marinated sea bass topped with crunchy red beetroot; a fisherman-meets-forager mix of cod chunks and mushrooms in warm dashi broth with herring eggs; a triple preparation of Iberian pork (including bacon pellets on ultrathin zucchini discs and a miniature kebab of pork belly cubes in tzatziki sauce); and numerous other finely wrought and flavorful inventions. Six courses for 80 euros. 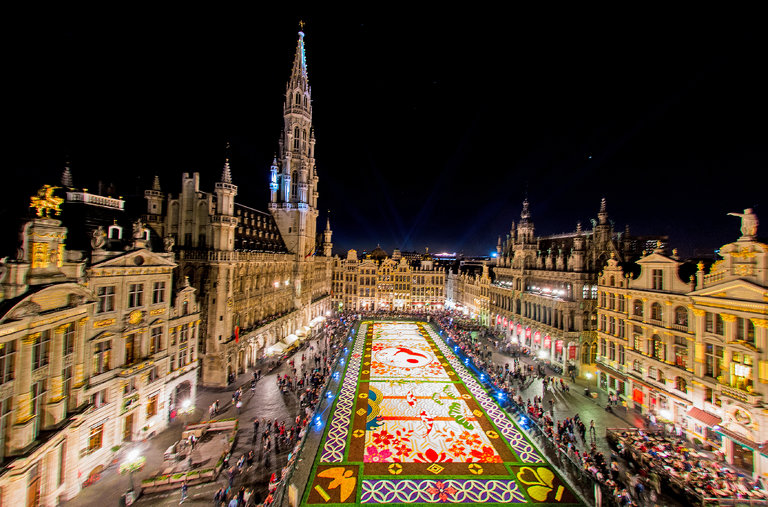 Even if you don’t know your lagers from your lambics, you can enjoy the homey décor, riverside views and convivial tavern atmosphere at Het Waterhuis aan de Bierkant. Choose from the extensive list of Trappist-brewed ales, sour suds and other Belgian brews — around 170 in all. The vibe goes upscale at The Cobbler, the cocktail bar in the new 1898 Post hotel. The soaring ceiling, majestic fireplace, Oriental rugs and book-lined shelves evoke a nobleman’s salon, as do drinks with names like Queen Anne’s Revenge (genever, rum, vermouth, absinthe, lemon juice, cinnamon syrup; 16 euros) and Le Marquis (calvados, Talisker scotch, Oloroso sherry, grenadine, cacao; 15 euros).

Bathed in divine light and watched over by Jesus, Mary, John the Baptist, Adam, Eve and a chorus of singing angels, a wounded lamb bleeds into a holy chalice in a radiant open field while oceans of worshipers — apostles, holy hermits, martyrs, virgins, popes, Old Testament prophets — approach from all sides and New Jerusalem rises in the background. Such is the vast, richly colorful and minutely detailed scene depicted by Hubert and Jan van Eyck in “The Adoration of the Mystic Lamb,” an assemblage of 12 wooden panels that form one of the most famous (and most often stolen) masterpieces of medieval art. (One panel is still at large.) Admission: 4 euros. The painting’s forum, the 16th-century St. Bavo’s Cathedral, is a soaring repository of paintings and sculpture that also houses “Saint Bavo Enters the Convent at Ghent,” by Rubens.

St. Jacob — isn’t he the patron saint of used trousers, silver soup tureens and gumball machines? You might think so, given the abundance of vintage and retro dealers who operate in the leafy cobbled lanes around his namesake church. In addition to a weekend flea market, the nearby streets hold Galerie St. John, a Baroque chapel-turned-antique shop that now draws worshipers of gilded clocks, Chinese screens, painted porcelain, exquisite glassware and Art Deco silver sets. Nearby, 20th-century items get second lives at Antiek-Depot, a two-level hodgepodge of toys, games, industrial lighting and midcentury furniture. 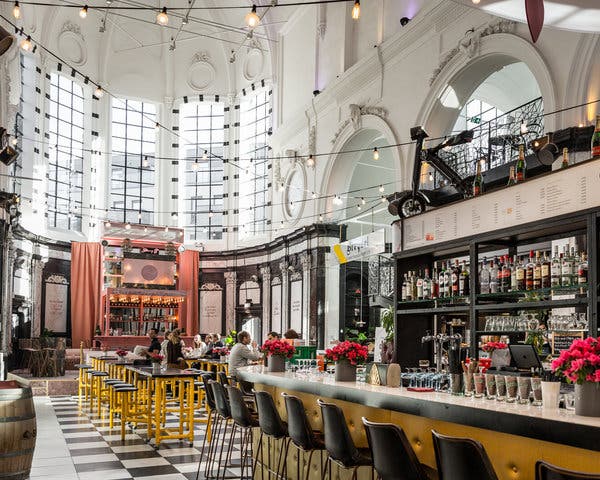 Holy Food Market — another deconsecrated church that now houses a bar and more than a dozen food counters — provides your daily bread, as well as your daily sushi, curry, pizza and bacalhau. Japanese, Indian, Italian, Portuguese and other cuisines provide one-stop global roaming, while French and Belgian specialties are on offer at Bubba (including crunchy croquettes of Emmental cheese and local Ganda ham; 4 euros) and Sea Me (notably, classic moules frites; 9 euros). The stylish central bar even serves (and sells) the market’s own house gin, distilled with Ghent’s famous Tierenteyn-Verlent mustard.

If you’ve ever fantasized about lounging in a bright red armchair made from corrugated cardboard while sporting a salmon-skin bikini, head to Design Museum Gent (adults, 8 euros), where those innovative objects (designed by Frank Gehry and Birgit Kraner, respectively) and hundreds of others are on view. Housed in an 18th-century townhouse, the museum uses period rooms of parquet floors, painted wallpaper and chandeliers for its temporary exhibitions, and more modern spaces for “Object Stories,” its permanent collection of (mostly) 20th-century design icons and iconoclasts. Classics like an Art Deco silver set by Philippe Woolfers, an S-shaped chair from Verner Panton, and a red plastic Olivetti typewriter by Ettore Sottsass shine alongside fabulously freaky items like Shiro Kuramata’s steel mesh love seat and Kraner’s fishy fashions.

With their street murals and independent designers, the narrow lanes of the medieval Patershol neighborhood showcase Ghent’s creative side. Highlights include huge black and white rabbits by the local artist ROA (along Tempelhof), and two adjacent buildings (in Sleepstraat) sporting multistory scenes — both eerie and dreamlike — by A Squid Called Sebastian and Violant. For local goods, the street whose name shifts from Sluizeken to Oudberg to Kraanlei turns up elaborate women’s hats by Ria Dewilde (Sjapoo), minimalist leather handbags by Mayenne Nelen (Mayenne. Shop) and wild sculptural lighting made from musical instruments and cookware (Blue Poodle Gallery).

“Don’t play with your food!” is, of course, a parental command familiar to children. Fortunately, the chef Tom Van Lysebettens didn’t listen, and his elegant restaurant, Cochon de Luxe, is now the laboratory for his culinary cleverness. Your meal might start with a tiny golden pig’s face of lush ham mousse and end with a morsel called Russian roulette: a chocolate bullet shell that contains either more chocolate or, occasionally, hot sauce. In between, the menu might include a Dadaist dish called Chicken Curry — which contains neither chicken nor curry, but rather smoked eel and yellow beetroot purée — and Darth Tatin, black cinnamon gel molded into the head of Darth Vader alongside vanilla ice cream. Seven courses for 55 euros.

Wine from Luxembourg? Does the tiny nation even have space for vines? Yes, indeed, and the Fossiles pinot blanc (8.50 euros) is a honey-apple white wine as rich and plump as the Duchy itself. That vintage is just one of the discoveries at Ona, a chic, candlelit bar devoted to organic and biodynamic wines from Europe. For a Benelux take on a classic Italian cocktail, slip into the dark and sultry Café Theatre and order the Negroni, (12 euros), which mixes genever infused with cuberdon (a local gumdrop-like candy), Campari and vermouth.

A trip to the Low Countries isn’t complete until you’ve encountered the Renaissance religious art of Hieronymus Bosch. To do so, head to Room 3 of the M.S.K. (Museum of Fine Arts; 8 euros). “Christ Carrying the Cross” depicts Jesus accosted by a scary mob, while in “Saint Jerome” the artist’s namesake lies prostrate in a dark, eerie landscape as an owl and lion look on. The regional survey continues in other rooms with ominous religious work by Rubens, stern portraits by Franz Hals, lively village scenes by Pieter Bruegel the Younger, wonderfully strange proto-expressionism from James Ensor, and the creepy surrealistic humor of Rene Magritte. for a taste of the 21st century, the S.M.A.K. contemporary art museum is just across the street.

True to its name, Furnished Apartments Gent(furnishedapartmentsgent.be/) has a collection of studios, one-bedrooms and larger accommodations for rent by the week or month in various neighborhoods. Weekly rentals start around 300 to 400 euros.